Platinum Racing stocks the premier racing tech for the beginner and professional alike at amazing prices. 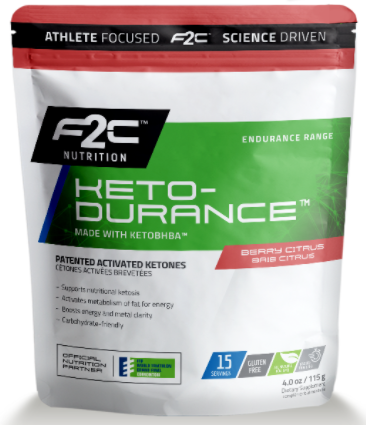 Keto-Durance™utilizes KETOBHBA™ a breakthrough patented technology that couples beta-hydroxybutyrate (BHB) to butyric acid (BA). This combination activates your body to start producing its own ketones from your fat stores in as little as 15 minutes. Unlike other exogenous ketone products Keto-Durance™is designed to be used in a high carbohydrate fueling program and does not require you to be in clinical ketosis to see the advantages of duel fueling your body. Keto-Durance™ is also a great option for fueling for a fasted workout and will not kick you out of a fast. Dosage options for endurance racing found on our website www.f2cnutrition.com/ketodurance/fueling In recent years, supplementation with exogenous ketones (ketone bodies) is skyrocketing to new levels. Therapeutic applications relating to dementia and other cognitive declines as well as performance-enhancing strategies (stamina improvement for marathoners and fat management initiatives) are all attracting attention due to the potent and promising effects of this supplementation. Nevertheless, available and competing information about these supplements is causing some confusion, with regulatory agencies trying to catch up to the messaging and claims. Here we unpack some new research related to Keto Supplementation.

KETOBHBA™ is the latest generation Keto supplement to have found its way into peer-reviewed published research. KETOBHBA™ is not a typical exogenous ketone; it is much more. KETOBHBA™ is an activated ketone; activated by the complexing of the beta-hydroxybutyrate (ketone body/BHB) with butyric acid (BA) – hence the name KETOBHBA™. Butyric acid, a short-chain fatty acid, is an activator of β-oxidation to stimulate ketogenesis. It does not induce the same gastrointestinal distress risks that medium-chain triglycerides pose. Butyric acid supports serum glucose clearance to reduce competition by glucose in serum with the ketone while facilitating ketone generation (ketogenesis) by the liver. These pharmacological characteristics form the basis of the ‘activated ketone’ activity. Butyric acid also plays a central role in gastrointestinal health, supporting an environment that voids pathogens and nurtures friendly gut bacteria.

The boiled down the distinct difference between KETOBHBA™ and the typical exogenous ketone supplement, BHB, is very simply rendered down to KETOSIS versus KETOGENESIS. Butyric acid, the short-chain fatty acid is the key! The Ketone (BHB) will induce ketosis to increase serum ketones from an exogenous source.

The source of the ketones in the blood is the supplement, itself; and not ketones made by your body from your body fat (his will also STOP your body from using or burning its own fat). One needs to burn through these ketone calories before ‘burning’ endogenous (internal body) fat calories for energy.

Alternatively, KETOBHBA™ is primarily designed to INDUCE KETOGENESIS to get the body to generate ketones from endogenous fat sources; to help you utilize serum fat as an energy source. The typical BHB supplements cause your own ketogenic activity to be terminated after you take the supplement. This inhibitive activity also topples the outcome we might be trying to achieve with the ketogenic diet. The ketogenic diet is designed with a low carbohydrate and high-fat macronutrient proportion to force the body to produce ketones – ketogenesis. However, an exogenous ketone supplement will stop this process. While KETOBHBA™ supplies the exogenous ketone it also supplies the signal to up-regulate β-oxidation, the process by which your body makes ketones, emulating and supporting the initiative of the vADS ketogenic diet and supporting the use of your body fat as an energy source. This ketone is then used by the cells to make energy – more energy for the cells than is typically made with glucose. The ketone is used to fuel your brain (neurons), so it operates at a higher level of efficiency. These ketones and the butyrate facilitate better insulin efficiency; blood sugar clearance to help those with prediabetic and diabetic insulin resistance and obesity.

Save this product for later
Display prices in: CAD